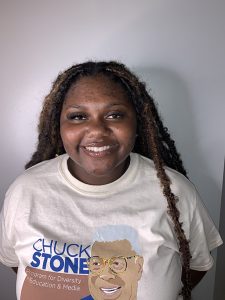 Lover of writing, music, and fashion, Ahmere Harper is a rising senior with definite plans for her future as a fashion journalist and community activist.

As an aspiring fashion journalist, Harper plans to attend an HBCU and named Howard University as one of her top school choices. In 10 years, she aims to have her own magazine company where she can incorporate her passion to make impactful change in her community.

She sees herself “bringing those two together, fashion and social work. I want to show that you can bring them together, even though they’re totally two different avenues.”

In high school, Harper balances her activities from the yearbook club to DECA while also being an active member of her school community.  As president of the Natural Hair Club, she said the journey to loving her natural hair has not been easy, but embracing her curls is something she hopes she can teach other girls to do for themselves as well.

“We teach about our hair and educate other people,” Harper said. “Despite the Crown Act and similar things, natural hair isn’t really accepted in the workplace, so we discuss and try to better the representation. Even though we are the same race, everyone has a different story as far as accepting their natural hair and becoming more comfortable.” The Crown Act was passed in 2019 in California to prohibit discrimination based on hair style and is the acronym for “Create a Respectful and Open World for Natural Hair.”

As to role models who have inspired her, she credits teachers, especially English teachers, for fostering her passion for writing. She also looks up to the former editor-in-chief of Teen Vogue, Lindsay Peoples Wagner, as a symbol of perseverance and success.

If one person stood out as her inspiration for greatness, it would be Rihanna. From the way she balances fashion and music with social justice to the way she dresses and exudes confidence, Rihanna represents everything Harper said she loves and stands for.

“I would love to learn more about what inspires her and how that can inspire me to do better,” Harper said.

She similarly looks up to her older sister, a fashion and merchandising major, who taught Harper much about gaining confidence.

About not worrying how people perceive you because it doesn’t matter,” she said, remembering the words of her sister. “Your impact comes from your voice, not what you wear or what you look like.”

If Harper could give a piece of advice to those struggling with confidence, it would be to focus on yourself and not worry about what others think of you. She said some might judge you on factors like your height, weight, or race, and look at certain elements like her long eyelashes, nails, and hair and consider those to be mutually exclusive to intelligence, but she advises to not to let that get in your way.

“Be who you are, shine your own light, because it doesn’t matter what you look like, you can still make a difference.”