A bright star in the night sky 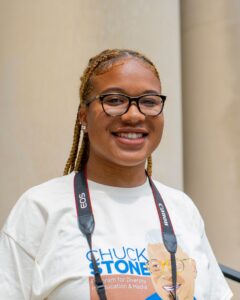 Ari Dunn, 16, has always stuck out on and off the field, as one of the only black girls on her high school lacrosse team and one of the few black varsity captains in her school’s history.

She has described this achievement as one of her proudest moments for her and the other black girls on the lacrosse team. “One of my friends told me that she wouldn’t have continued lacrosse if I didn’t become captain,” Ari Dunn said.

This kind of representation is rare as lacrosse at the Park School, like most private schools in the DC-Metro area, is made up of mostly white and wealthy students. Dunn has worked hard to become a role model for other younger black students who are also on the team, creating a safe space for them to play a sport they are passionate about.

Through her tenure as captain and other positions throughout the school that are rarely given to minority students, she has become a trailblazer for her school community and beyond.

Sports have been an important part of Dunn’s life due to her dad being an avid football fan. As a little girl, one of Dunn’s first memories was her, slowly creeping into the dimly lit family room with her dad following the football game on the TV with his brows furrowed with attention. She sat next to her dad, and he explained what happened. Her eyes lit up. “My dad teaching me about football became a sort of bonding experience for us,” Dunn said.

Dunn said her mother’s strength and determination inspires her daily life and allowed her to dream of playing football one day.

As she entered third grade, Dunn gravitated towards lacrosse, a sport that seemed more socially acceptable than football as a girl. “Obviously, football isn’t realistic for a girl, so I chose lacrosse,” she said.

Although Dunn undeniably stands out, she has an ultimate desire to fit in. She recounts a time when she was deeply interested in the arts. “As a kid, I was really into art. I painted. I drew. I even played the bass guitar.”

This eventual loss in interest was not coincidental, she said. “Art was never taken seriously in my house.”

Dunn has never felt seen or heard at her school, where she faces the unwanted stares, unnecessary questions and unwarranted assumptions that come with being a black girl in America, she said. This has made her more aware of her “blackness” and femininity, and how they combine. “Going to a co-ed predominantly white institution has taught me to differentiate between microaggressions because of my blackness and me being a girl. Microaggressions are a part of my daily life, and I have to pick my battles.”

Dunn serves as an Admissions Ambassador and on the Athletic Council, positions she finds both impactful and performative. “You could say that I am grateful for my position but I usually get chosen to show around black families along with my one other friend,” she said. “It just feels like the diversity at (Park) is really performative.”

Dunn has had to grapple with wondering whether she was given various opportunities due to her identity.

Dunn feels connected to the black female cause. Dunn is the co-president of the Black Female Forum, an affinity group at the Park School. “I feel like it’s really important in an all white environment because I am around people who look like me,” she said. “I am able to speak freely without any judgment.”

Her principle of creating safe spaces for people carries forward in her work at Sarah’s House, a homeless shelter for women and children. “Going to (Sarah’s House) was really humbling for me because I was able to see kids who have nothing, when I have been able to have everything I have ever wanted.”

Dunn displays empathy for those who come from different backgrounds, a quality that led her to the Chuck Stone Program. Through the program, the 2022 Regional Scholastic Art & Writing Awards and more, she has been able to narrow down her career toward sports journalism, a field continuing to grow and evolve. “The field is getting better at having POC men on air. But women rarely get a voice.”

But she has hope for the future of journalism in general. “I would use what I learned at Chuck Stone to open avenues for underrepresented people in sports,” she said.