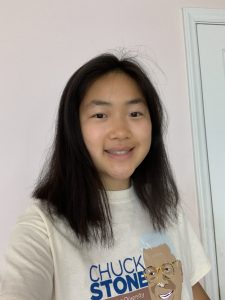 Caroline Chen, self-described as passionate, thoughtful and empathetic, seeks to pursue journalism and politics at the state or local level, goals set through her writing and interest in educating people about issues that affect them.

Chen, 17, from Chapel Hill, started her writing career as a “failed novelist” at a young age, filling a weathered green notebook with fantasy novels, perhaps inspired by her childhood favorite books, the Harry Potter series.

“I always liked writing, essentially,” she said. “When I got to high school, I realized I might not want to write fiction books, but I still wanted to be able to use my writing for something I’m passionate about.”

She found her passion freshman year when she took a journalism class. Initially worried about how the class would affect her GPA, she laughed when looking back at her hesitation.

“I was very concerned about these types of silly things,” Chen said. She realized she enjoyed talking to people in her community and writing their stories, or bringing attention to events people wouldn’t usually notice, specifically climate change and racial injustice. She writes for the school newspaper, the ECHO (East Chapel High Observer), and attends journalism camps to nurture her interest in the field.

Reflecting on how journalism has affected her personally, she said: “It’s given me opportunities to talk to people. I’m not much of an extrovert, but this (journalism) is like a free pass to do those things, like ask the mayor a question.”

Growing up, Chen found herself surrounded by people who mostly looked like her, noting how that lack of diversity gave her a very narrow worldview. She started learning more about local history and local politics when she went to high school.

“Just being able to talk to more people in my town who I didn’t interact with before was very impactful for me,” she said. “I realized that my town, or even the country, was very different to what I’d seen before.”

Chen recently has been helping organize free summer camps for families with children through the Refugee Community Partnership. Playing soccer and doing arts, crafts, and science experiments are some of the activities on the camp agenda, and Chen said she has met kids with different family backgrounds she had not been exposed to.

“It’s really made me a better person just playing with these kids,” she said. “They have such complex stories behind their lives, but we’re really just kind of the same.”

Recently getting involved with politics at the local level, she said she dismisses the notion that local politics are mundane and not newsworthy. “There needs to be people to cover these things, and help them (the public) understand it, just like they understand national politics,” she said.

During the pandemic, Chen has continued playing Ultimate Frisbee and enjoys spending time outdoors hiking, or walking her two new dogs. She also helps out at a local farm.

“It really makes me feel more down to earth,” she said, jokingly. She listens to cooking podcasts and videos and cooks and bakes in her free time. She looks forward to traveling in the next year as restrictions open up and spending more time with family and friends before heading to college.

“I’ll relax more, maybe stop putting pressure on myself like I did throughout high school,” she said.