Journalist with an aim to amplify 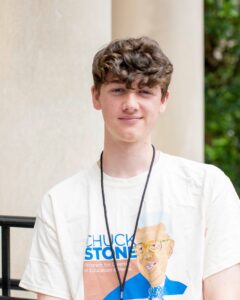 Connor Foote, 17, has no trouble drawing your attention to the irony of things. In fact, this student journalist really enjoys it.

Foote admitted to being a little surprised that he was the only white male student out of the 12 selected scholars at the 2022 Chuck Stone Program for Diversity in Media and Education.

“It’s pretty ironic that I’m here at a program for diversity, but I’m more than happy to be the token white guy,” said Foote,  a Virginian who is quick to make a joke or insightful comment.

Journalism is Foote’s way to use his acknowledged privilege and power to amplify unheard voices. As In-Depth Editor of The Hawk Talk, his school publication, and Editor-in-Chief of a newsletter for a local pet adoption center, he found fulfillment in reporting for his local community.

In his first year as a writer for The Hawk Talk, Foote tackled the topic of athlete activism and speech in major sports leagues.

“After writing that first article about the social justice initiatives in pro sports, I was just like, yeah, this is what I want to do,” he said.

The piece, published by The Hawk Talk on November 5, 2020, compared the NFL and NBA in their approaches towards the social activism of their players. Foote examined the player-driven method of the NBA to the much more rigid NFL. He pointed to Colin Kaepernick, the former quarterback who was cut from the 49ers for kneeling during the anthem.

“You have a lot of NBA players who are really well known for speaking out on issues that affect their communities,” Foote said. “I mean, Lebron can kind of do whatever he wants because he’s Lebron, but even lesser-known players have much more license than they would in the NFL.”

“When you have a player sign a contract, they’re turning over a lot of say over what they are or are not allowed to people who probably don’t share the same views as (them,)” he said.

It’s clear this issue strikes a passionate note with Foote. He grew more animated as he recounted the social justice piece,  which he declared one of his best to date. Pro-athletes are often incredibly important figures to many marginalized communities in America, he said, and sports leagues have the resources to empower athletes to use their voice and make a difference.

“Sports and politics are a lot more intertwined than one thinks — you can’t separate them,” he said.

That’s exactly what Foote and his family did when a foster puppy came into their care through a local adoption center called Lucky Dog Animal Rescue.

“He was just this skinny dog with mangled fur from Mississippi,” he said. “We named him Chuck Pierce after this character from Great News who’s a TV newscaster. Definitely got too attached to him — we just weren’t able to take care of him forever.”

The family already had two dogs, golden retrievers Luna and June. However, they weren’t rescued: they came from a breeder.

“Yeah — I know,” he said. “I’m definitely going to adopt in the future. I really believe in adoption and what centers like Lucky Dog do.”

He pulled up a picture of Luna on his phone, who came to North Carolina with his family to drop him off at the program.

Foote became more connected to the adoption center when he accepted the position of Editor-in-Chief of its newsletter from the former editor, who was also Editor-In-Chief of The Hawk Talk. The monthly publication helps several cats and dogs — who quite literally do not have a voice — find loving homes.

“I’ve done service work in the past, but doing it through an avenue that I’m good at and enjoy really made the difference in why I chose to get on that staff.”