A father’s story, a daughter’s voice 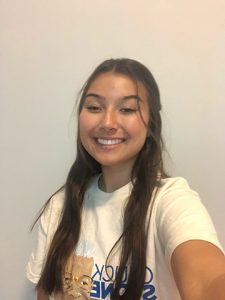 Ellie Hamashima, a 17-year old rising senior at Green Hope High School in Cary, North Carolina, is no stranger to feeling different. Her father was one of three Japanese students in his high school, where the other two were her aunts. Hamashima herself has had to deal with being an Asian-American in the progressing, yet polarizing culture of the United States today.

Both of their experiences have created a unique father-daughter relationship based on some of the issues in her father’s day and those in his daughter’s world.

“We have a loving bond, but it’s bittersweet. His experiences have made him to see the world differently,” Hamashima said. Her father endured long years of name-calling and bullying, as well as discrimination that went beyond petty teasing. He was branded an outsider.

Most significantly though, his stories and their relationship have served to guide Hamashima into shaping her own view. “When he was growing up, [diversity] was not regarded as a good thing; it was looked down upon. [His story] showed me how far we’ve come,” Hamashima said.

She recognizes the progress that society has made, but her own background reminds her that the job is not done. Hamashima has paid close attention to the recent influx of anti-Asian hate and the crimes that come with it. Regardless, she prides herself on her Asian heritage and keeps her father’s story in mind as hope.

“It reiterates that progress is possible. There is a long way [to go], but I think we can get there,” she said with a spirit of optimism.

These experiences have also served to shape her own attitude towards the matter. Despite being only 5 feet tall, she has “the personality of being 6 feet tall,” she remarked. referring to her relatively assertive personality, contrasted to her father’s experience, in which he was not allowed to be assertive.

“After hearing these stories as I grew up, I learned to assert myself and be cautious,” she said.

Hamashima found that one way to assert herself effectively was through language, and her hobbies began to include both reading and writing. She quickly realized the importance of communication and media. As she matured throughout the pandemic, she said she witnessed firsthand the impact that the news has on people. Whatever the articles said directly correlated to the sentiment of citizens.

“I watched the media cover stories that changed people’s lives and inspired others to help,” she added.

Hamashima is an active member of the local Teen Mental Health Organization, where she is able to write articles regarding topics in mental health. Here, she is able to direct her community towards many helpful resources using her voice. Hamashima has also developed an interest in music, and she has recently taken up songwriting as another form of expression.

All in all, Hamashima said she has been able to culminate her family’s experience with her own to augment her own voice. “I want to amplify my voice for other Asian and Japanese-Americans,” she said. “Sharing a story can have such an impact. It can change someone’s whole perspective.”

With that in mind, Hamashima aspires to be a journalist, telling her own stories in an attempt to help other people find their voices as well.