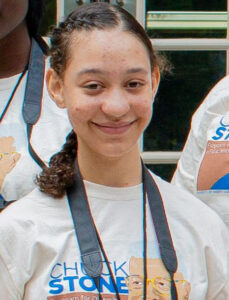 Even though she was born and raised around Mount Kisco, New York, her grandparents grew up in Haiti. They passed down the importance of preserving their Haitian language to her mother, who then passed it down to Wheeler.

Wheeler, 17, is a rising senior at Sacred Heart Greenwich in Connecticut. She is outspoken about her Haitian identity and her love for the French language.

At school, it hasn’t always been easy for Wheeler to celebrate her Haitian heritage, which she said has been stigmatized as “the poorest country in the world.”

“In seventh grade, my U.S. history teacher showed…a documentary about Haiti. The documentary showed them making cookies out of the mud and eating them,” Wheeler said. “We were never shown the accomplishments of Haitians.”

Growing up, she spoke French at home. But during her elementary school years, Wheeler stopped responding in French to her mother and grandmother, opting for English instead.

“The message I received is that my culture had no place outside my home,” Wheeler said.

When Wheeler started high school she signed up for French II, a decision that reignited her love for the French language.

“I chose to be proud of my country and proud of the fact that I was working to rebuild my knowledge of my language,” Wheeler said.

How others perceived her country made Wheeler want to fight harder to show Haiti’s beautiful culture. “When giving presentations (for French) I show Haiti as having amazing foods and beautiful beaches,” Wheeler said. “I need to humanize my country and my people.”

Now Wheeler makes it her goal to use her language skills to further the global acceptance of other cultures through her extracurricular activities.

Wheeler is part of a multilingual literary magazine called Voices at her school and volunteers as a teacher’s assistant in an early childhood bilingual program.

At the program, she volunteers 5 hours every weekday in July and every other Saturday during the school year. Wheeler wants to help kids learn to love their language and “appreciate the gift of being bilingual.”

“I’m co-editor of Spanish, French and Mandarin (for Voices)” Wheeler said. “I volunteer with the bilingual program because I like helping (children) maintain their family’s language and English.”

“Wheeler’s grandmother didn’t just pass down her native French language, she also passed down her love of language learning.

“(My Grand-mère’s) knowledge of languages got her interviews and promotions…it helped her bridge the cultural gap,” Wheeler said. “She instilled a love of languages in me and now I speak French, English and Spanish, and I’m learning Mandarin, American sign language and Italian.”