Speaking up in Pakistan 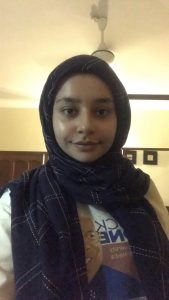 From a kindergarten-era work making it onto the prestigious door of her Dadi’s fridge to poetry shedding light on restricted topics in high school, Hajra Raheel has made an effort to express herself through writing.

Since moving to Karachi, Pakistan four years ago, Raheel, 17, has been outspoken and impassioned about what she sees as issues in her country. Despite censorship laws, she writes about topics such as reproductive health and rape culture. Some of her activism, such as what she calls the “skin-whitening epidemic,” comes from personal experiences.

“It really annoyed me when I used to see those skin-whitening ads on TV,” Raheel said. “I was like, ‘Whoa, they are literally bleaching their skin, it’s literally skin cancer in a bottle.’”

Raheel said she has seen relatives with products like “Fair and Lovely” on their vanities and has often observed the issue of colorism present in day-to-day life.

“Whenever we used to go to family gatherings, my relatives’ moms used to compare their children to me and say, ‘Oh, look how white she is. Why can’t you be like her?’” Raheel said. “I just started telling them to stop comparing themselves to me from an early age.”

Raheel attends the Karachi Grammar School, which she describes as far more progressive-thinking than schools in most other parts of the country. Its environment has enabled her to speak out more freely on the issues she cares about.

Describing a recent trip to slums in Karachi, she said she saw families with 14 kids living in one room, with little access to clean water and even less access to information about reproductive rights.

With a passion for public health and biochemistry, Raheel is part of her school’s Einstein Society, a STEM-oriented club. She serves as head of the society’s award-winning academic journal that publishes research.

Raheel said she dreams of eradicating polio in Pakistan one day. She remembers returning to the Karachi airport one day after a vacation abroad and being confused by the polio drops administered to her little brother. She discovered afterwards that Pakistan was one of two countries in the world with polio still a major health issue. She resolved to change that, beginning with writing about it.

“It’s important to me that I do speak up about stuff that is important to me,” Raheel said. “It might not be that important on a global scale, like skin-whitening, but I feel like I’ve been mostly exposed to American problems. So I’ve kind of tried to focus my poetry on Pakistani problems specifically, because I feel like there’s not a lot of people doing that right now.”