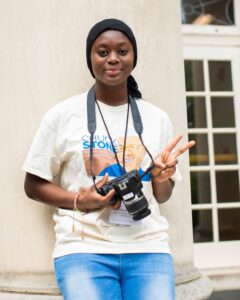 Hidaya Fatao’s picture of her future consists of one thing: financial stability — one in which she is living comfortably and next month’s rent is not a persistent worry.

Fatao, a rising senior at East Mecklenburg High School, ties this clear picture of her future to her family’s roots, having witnessed her parents work for where they are today as immigrants from Ghana.

Fatao herself was born in Ghana, but was only 2 when she moved to the United States. After visiting her extended family, she spoke of the disconnect she feels with the culture and the native language, Hausa. Many of her older family members don’t speak English, causing problems in communication for Fatao.

When she last visited Ghana, her family would have traditional African dishes prepared, but Fatao recalls not being able to eat the food because it was too different from what she was used to.

“It kind of makes me feel like I’m lacking in a certain way,” Fatao said. “I don’t have that experience with the language and with the country.”

Her immediate family in the United States consists of her mother, her father, two sisters and two brothers. Fatao said that while her family doesn’t fit the American standards of “close,” they like to stick together because so much of their family lives in Ghana.

Fatao admires her parents’ hard work, and maintains a similar work ethic through her school work and extracurricular activities.

“I tend to overwork myself with a lot of my schedules,” Fatao said. “Just because I know what I want for myself.”

Fatao finds confidence with her leadership position in HOSA. Her role with her school newspaper provides a platform for writing about topics she’s passionate about, such as local politics and current events.

The two areas she is most eager about are law and philosophy. Fatao sees becoming a lawyer as a perfect melding of these interests.

“I want to uphold the system that we have in place,” Fatao said. “But I also want to defend people who have been wronged by that system.”

She is inspired by the struggles of her family, people in her community and on social media, who are financially disadvantaged, and would like to become a public defender to help them.

“I want to help people who don’t even have time to think about paying rent… because they just don’t have those kinds of resources,” Fatao said. “If I’m able to provide that, it would be my service to the world, and that’s something I’d be fulfilled by doing.”