Pushing for change where it matters most 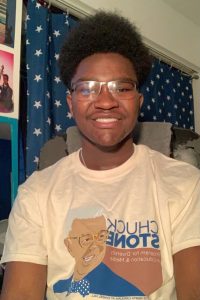 Persevering—the ability to persist in times of great difficulty with tenacity and grace—is one of Mekhai Howard’s strengths.

“I just remind myself of the bigger picture, and if I put in the work now, I’ll be successful later,” he said. “You can’t achieve what you want without pushing through and working hard.”

His ability to take charge in his school and his community, coupled with a moral compass to educate those around him allows Howard to stay true to himself and push himself harder.

Tragic deaths such as George Floyd, Daunte Wright and Breonna Taylor shook the nation to its core and led to an uproar of social activism. Black Americans especially took the past year to speak up about issues that were long overdue for a solution, like police brutality.

“Being Black in America has taught me that I don’t have the luxury of being naive,” Howard said. “There’s always going to be a time where my race is considered a controversial topic.”

Howard, a rising senior from Rochester, New York, took a stand and spoke out about racism through his participation in the Black Student Union and Mosaics Club at McQuaid Jesuit High School.

“I posted about it on social media and talked to my friends about it,” he said. “Since I also go to a mostly all-white school and an all-boys school, I can see that there’s a lot of ignorance. I had to argue and explain to many of my friends why what happened to George Floyd and Ahmaud Arbery was wrong.”

Besides social activism and community involvement, Howard is a music producer and a football player in his free time.

“I’ve always had a love for music,” he said. “I’ve been playing drums since I was like 2 years old. So when I got a laptop I started making beats when I was like 14.”

Howard finds some of his inspiration from famous producers like Wheezy (not to be confused with rapper Lil Wayne), Nick Mira, and Bryan Lamar Simmons, who goes by TM88. While Howard does not intend on playing collegiate or professional football, he enjoys being a linebacker for his school’s football team.

Post-high school he intends on attending a Historically Black College such as Howard University in Washington or Morehouse College in Atlanta and becoming a business major. He also has plans on earning his Master’s in Business Administration and joining his family’s real estate business.