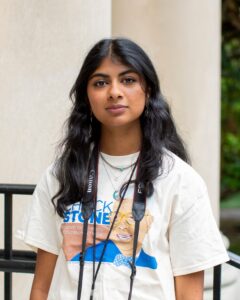 In the first 17 years of her life, Sachi Akmal lived in six different places.

Born in Ohio, she was in Michigan by age two when she first saw figure skating live on TV. “I was just absolutely awestruck by how graceful the movements and people who were doing them were,” she said. ”I just knew that that was something I absolutely wanted to do.”

While most of her peers were crushing their Tonkas under T-rexes, Sachi had her plan to athletic greatness and international fame all mapped out.

But she moved to Georgia, where the skating lessons are few and far between. Her family then moved to India, Connecticut and finally North Carolina. The dream of ice skating faded. The short times in each stop prevented Akmal from developing any meaningful attachment to a culture. Even as a daughter of Indian immigrants, moving to India to take care of her grandmother didn’t resonate.

“I still find it difficult to condense my identity into a sentence or two,” Akmal said. “Especially when I’m asked where I’m from—how am I supposed to answer that? Where my parents are from? Where I was

born? Where I live currently? None of them seem right.”

Her father is Muslim and her is mother Hindu, but they incorporated many different elements, like Buddhist practices, in their combined belief system. The poly-religious home she grew up in was instrumental in forming her character. When the Akmals moved back to India, a majority Hindu country, she experienced discrimination for her religious views.

It was hard for her to understand: she was Indian, so why was she still feeling out of place? It was the same feeling she experienced in America, half the world over, she said. That ambiguous feeling is something she hadn’t figured out yet.

“I didn’t realize how much my religious background shaped the way I viewed other people and aspects of the world until I was older,” Akmal said.

Everywhere she moved, the feeling followed. It was hard to be the new girl, and it happened a lot. She wanted to fit in, but found it hard to find shared experiences. She’s come to realize that the places she’s lived and cultures she’s experienced can’t define her.

“I don’t like shaping my identity around the places I’ve lived in,” Akmal said. “I think instead they’ve allowed me to discern what is most unique to me. What do I like doing regardless of where I am? Journalism has been one of those things because it’s so universal.”

In her current home in Charlotte, Akmal helped to found Wisteria Magazine, a publication dedicated to raising minority voices in her community. Through Wisteria, she’s found a community of people as diverse as her and shared experiences with them that others could not relate to. One of her articles, “The Sweeping Term of ‘Asian American,’” dealt with the different processes and reasons for using the term. What does it truly mean to be Asian, to be American, or both at the same time, the article asked. The Wisteria community has allowed her to participate more fully in this question.

“I see Wisteria growing as a part of our community and being able to publish content more consistently,” Akmal said. “Especially growing our geographic outreach: last time we took on more staff members we got people from Canada and Massachusetts.”

In her Instagram bio, along with the Wisteria link, she has a string of letters: “oh ￫ mi ￫ ga ￫ pune ￫ ct ￫ nc”. When others assume it might be some shortened code or a quote from a book, they are informed it is in fact a list of the places she’s lived. While they now know where she’s come from, Akmal is content not trying to figure it all out.

“Identity for me is something that comes together as a result of experiences,” Akmal said. “It’s very fluid. I think undergoing external change, as much as I have, has helped me find the aspects of my identity that are integral to me.”