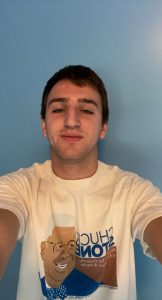 Fascinated by the world around him, Fromberg said he believes one of his biggest accomplishments is his perpetual ambition to learn.

“Learning can happen all the time,” he said. “Just small day-to-day interactions can help me see things differently.” Fromberg’s constant quest for knowledge has not only led him to new perspectives, but has also guided him to enticing hobbies, such as writing and sports.

Writing, in particular, is captivating, Fromberg said. “You could have a sentence, and every reader would have a different interpretation.”

His fondness for writing began in eighth grade when he was given a creative writing  assignment.

“At first I didn’t like to write, but with the assignment of having to write a novel, and the help from my teacher, I realized how passionate I was about it,” he said. “A five-page assignment turned into over 50. It was the first time where I was able to say, ‘I like writing’.”

While 13-year-old Fromberg might not have excelled at listening to directions, his story was incredibly impressive, sparking support from his teachers and his family. His grandparents assert to this day that his novel was one of the best pieces of literature they have ever read.

Fromberg has continued to write throughout his high school career, eventually finding a love for journalism. He has discovered that “journalism, in a way, ties to everything.”

Fromberg writes for The Prowler, the newspaper at Bridgewater-Raritan High School. He also is editor-in-chief for an Instagram headline page for Bridgewater, New Jersey, as well as manager of Phenom Media, a sports journalism page. From his multitude of journalism related projects, it is clear Fromberg possesses determination and drive to gain exposure to different aspects of the field.

“Really, I’ve just been trying to delve into as much journalism as I can so I can get more experience.” he said. “Also, I enjoy it.”

Apart from journalism, Fromberg is enthusiastic about sports. He enjoys running track and field for Bridgewater-Raritan High School, in his home town of Bridgewater, New Jersey. He also participates in “Buddy Basketball,” a program dedicated to playing basketball with children with special needs. After watching the passion sports fans exert, and the interactions and community that such passion can produce, Sam said, “Sports are another form of human expression.”

A large part of Fromberg’s identity is his Jewish heritage. He said he believes a sense of caring and empathy is shared within the Jewish community and that these beliefs have shaped him into who he is today. He states that many of his morals and beliefs stem from being Jewish.

“Judaism is a whole different perspective on life.,” he said. Within Judaism, community is ever present. A bond is immediate with other Jewish individuals.”