The challenges of finding faith 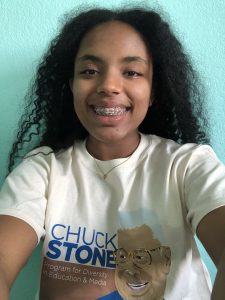 The daughter of immigrant parents from Ethiopia, Sara Eyassu, 16, grew up in an orthodox Ethiopian church and has since worked on strengthening her relationship with God and investing more of her time into her faith.

The rising senior from Aurora, Colorado, also incorporates her dedication and commitment to helping others through her activities revolving around social justice.

“Religion means relationship to me,” Eyassu said. “I talk to God like He’s my best friend with respect, of course, but knowing He has a plan for me while I become enlightened by His spirit is the basis of this connection.  I know Christianity gives me forever guidance and hope in the world’s future.”

Some of her social justice activities include being involved in a collaboration between two clubs, the Black Student Alliance and Interact Club, which made shirts to combat racial justice and donated the funds to the American Civil Liberties Union and the Southern Poverty Law Center. She also took part in another collaboration between her school’s Interact and Sustainability clubs in which they made masks and donated the proceeds.

Eyassu is also involved in the Girls Give Back club, which is centered around empowering women.

“I am really engaged with it (Girls Give Back),” she said. “It’s mainly about empowering women and volunteering to help the community, and I wrote a blog post about the discriminatory controversies in the Olympics.”

In this post, Eyassu specifically referenced the racist patterns within the Olympics regarding the rules and regulations that strain female Black athletes and prevent them from performing to their greatest potential.

Outside of academics and extracurricular commitments, Eyassu enjoys spending leisure time with friends and family, relaxing and watching TV, and exercising. She plans to attend college and pursue a career in journalism.

“My school newspaper is my favorite activity because I get to read an array of opinions and ideas, especially when they are things that I did not know about,” Eyassu said. “I think ingesting other people’s experiences and gaining insight into diverse perspectives is a beautiful aspect of journalism, and you benefit so much from that.”

Aside from activism and editing, Eyassu also devotes time and effort to gymnastics and is a part of her school’s gymnastics team.

“I enjoy the power I feel as I rebound out of a back handspring or hear the creak of the beam as I land a jump,” she said. “Gymnastics is such an empowering sport. I depend on my mental and physical strength, always displaying challenges before me.”

Those strengths she uses in other ways.

“I think figuring out who I am as a person has been a challenge,” she said. “I was a little lost in the beginning of high school and wanted everyone to like me. I don’t think I was really set in my faith, which can really throw you off.

“I think overcoming the challenge of figuring out who I am, knowing that I am still learning and growing, has helped me with my stagnant mindset,” she said. By utilizing the time during the pandemic to strengthen her relationship with God, Eyassu added that she has been able to grow and develop to be the person she is today.