Writing that makes a difference 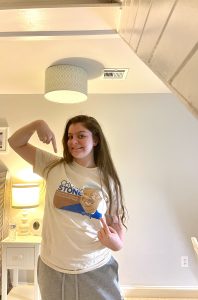 However, McIntyre is much more than just an activist-journalist. She is editor-in-chief of her school newspaper, GH Falcon at Green Hope High School, a ballet dancer, a baker and an avid reader.

Writing has always come instinctively to her. “When I was little, I used to write with crayons all over my house. I was obsessed with writing my name,” she said.

McIntyre dabbles in many forms of writing, such as advocacy articles and non-fiction articles. However, her favorite is narrating a story through her work. She loves telling a story, engaging the audience, and taking them on a journey.

Despite interviewing lying outside of her comfort zone, she said she enjoys it immensely. “Hearing your story and making it my story” is how she puts it, as her eyes light up.

Her early hobbies, such as ballet, motivated her to take up journalism. It has always been vital for her to express herself and communicate, whether through dancing or writing. What McIntyre is most passionate about, however, is gender equality.

“A big reason I am interested in women empowerment is my mom,” she said. Her mother’s actions and reasoning hugely influenced how McIntyre feels about the world. Along with her mother, she volunteers at National Charity League, a non-profit for mothers and daughters. She also writes for an organization that spreads awareness on mental health. She comments on issues such as casual sexism, patriarchal norms and toxic masculinity.

“You can be a man and you can cry without the bounds of toxic masculinity,” she remarked about her beliefs.

Coming from a diverse neighborhood, McIntyre said she has observed people around her experience casual sexism and racism every day. She sympathizes deeply with her peers and hopes to make a difference in whatever way she can. In the last three years of high school, particularly in the pandemic, she has done comprehensive research on racism to take informed steps towards the well-being of others.

When McIntyre is not occupied writing or volunteering, she enjoys listening to music and doing the crossword in the newspaper. Her music taste ranges from pop music like Lana del Ray to vintage classical songs, owing to her ballet. Getting a fresh iced coffee in the morning is one of the things that keep her going.

McIntyre has diverse goals, such as one day writing a book. One of her inspirations is Anna Wintour, editor-in-chief of Vogue magazine. Although Wintour is very distinctive and works in another field of journalism, McIntyre said she admires her work ethic and achievements and hopes one day to do as well as she has.

Ultimately, McIntyre stated, in looking at herself in the world: “I would not want to be most beautiful or most photogenic. I’d rather be the kindest.”