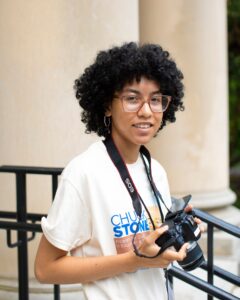 Hayley Ochoa would love to make a movie one day. Inspired by K-dramas and her favorite author’s short stories, Ochoa’s love of media has driven her to explore other people’s origins, cultures, and languages.

“If I ever had the chance, I would love to make a movie,” Ochoa said. “Filmmaking was actually a career I was thinking about, but I think about a bunch of things so take that with a grain of salt. I love movies, and I think movies have really influenced a lot of my general perspective on life and what I think things should be like and things I want to learn more about.”

Many of Ochoa’s interests are intertwined with media, for example, her interests in journalism and world languages have been influenced by books and movies.

Ochoa, 17, has lived in Charlotte, NC almost all her life. At three, she moved from Miami to North Carolina.

While Ochoa said she has yet to find a passion that will transform into a professional pathway, she has fostered concern for global communities. Ochoa is thinking about travel nursing with the Red Cross or a similar program as a way for her to go beyond vacationing in countries and fully interact with and impact new communities.

Ochoa’s enthusiasm for languages stems from her own identity as the only child of two immigrants, with her father from Cuba and her mother from the Bahamas. As Ochoa lives with her mother who does not speak Spanish, Ochoa studies Spanish in school to remain connected to her heritage language.

She is engaged with Hispanic and Korean cultures through telenovelas and K-dramas, but hopes to develop fluency in Spanish and Korean by traveling to and living in a Spanish-speaking country and South Korea. She finds an informal teaching environment to be the most effective in learning both the language and the culture. Ochoa hopes to learn naturally through conversation.

Beyond Spanish and Korean, Ochoa also hopes to learn Hebrew. Her interest in the language came from a tenth grade English project centered around the reading and sharing of translated copies of non-English-language books. Ochoa discovered a short story by Etgar Keret, an Israeli author who writes in Hebrew. She enjoys his work for the shocking endings to seemingly normal stories and the adaptations of bible stories. While Ochoa has read the translated versions of some of Keret’s stories, she would like to read the originals someday.

“I feel like a lot of my language learning endeavors are because of media,” Ochoa said.

In her sophomore year, Ochoa applied to join her school’s newspaper, East Mecklenburg’s The Eagle as a way to forge friendships in the wake of isolated schooling due to COVID. After going through the interview process, Ochoa was accepted onto the staff of the newspaper and joined the six-person team that she now calls her community. She will take a leadership role next year, leading the staff as internet editor in chief.

Ochoa’s value of community carries over to her desire to find or create a language learning community for herself and others as well as her interest in living in a city. Ochoa is intrigued by “the bustle of a city with everything nearby and the community of people,” Ochoa said.

While Ochoa has numerous different interests spanning from biology to drawing realism, Ochoa found many of her interests through movies. Movies that depicted journalism as glamorous and hard-hitting, such as Lois Lane in the Superman movies, were driving factors in her interest in pursuing a career in journalism.