Running for representation and racial equity 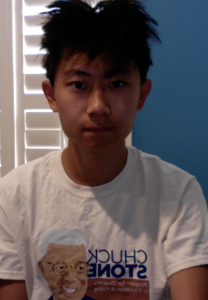 From leading his team on the track to advocating for racial equity on the stage, James Hung, a rising high school senior from Cary, North Carolina, is a passionate and determined individual who strives to incorporate and lead conversations about diversity within his community.

The proud son of two Chinese immigrants, Hung, 17, is captain of the Enloe Magnet High School cross country team, elected by his fellow runners to that role.  He said he believes that cross country has led him to be more open minded and considerate of others.

“The cross country team is a great example of diversity, strength, and camaraderie,” Hung said. “The team has so many people from different backgrounds, sexual orientations, and identities.”

Cross country enables its members to put aside their differences and work together for one goal, he said. “We never let [our] differences define us but rather contribute to our overall community. We all identify as runners first, and that formed our close emotional bond.”

Hung attributes his cross country experience in giving him the courage to speak out about the issues he saw on campus.

After noticing the lack of diversity in the theater program, Hung and fellow students formed a racial equity committee in his school’s art department.

“In my high school our theater program was very white-dominated, but there was a lot of diversity in terms of students who were involved in the program,” he said. “I wanted to start a conversation with teachers to speak about the lack of representation.”

Following the committee’s formation, there was an increase in diverse music selections, pieces, and productions in the program. Hung also noticed a new willingness by both students and teachers to start discussions about diversity.

“I’d definitely say that my position as a cross country captain gave me the leadership skills and confidence to form the equity committee,” Hung said. “Part of being on the team is hearing other people’s perspectives and needs and not belittling and demeaning them.”

Recent political events and his own personal values of diversity have motivated his passion for journalism and politics.

“Journalism is a tool that citizens of the world can use to make educated decisions,” Hung said. He believes that the media should report the truth and not just tailor to what people might want to hear. “Journalistic integrity and quality journalism is really important so that people can make their own opinions and ideas based in fact.”