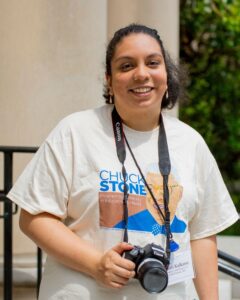 Preeti Kulkarni’s name is a combination of her dads, moms, and grandma’s names and even their personalities.

“I got Pr from my dad, the ti came from my mom, and the e came from my paternal grandma”  Preeti Kulkarni said.

She said this naming combination helped her prioritize family and culture in her life.

Kulkarni’s parents moved from India to America before she was born to escape poverty and educational restrictions. Kulkarni’s mom thought she was going to hate America when first moving there, but she grew to love it, Kulkarni said. Kulkarni’s dad assumed he was going to love America, but he grew to hate it.  Kulkarni was born in Tampa, FL, but moved to Gaithersburg, MD before the age of two.

Even though Kulkarni, a rising senior at Academy of the Holy Cross, lives in America, Kulkarni feels a strong connection to her Desi culture and values. She says her family celebrates Diwali the festival of lights and Holi the festival of colors each year. During these celebrations, her family prays together and celebrates new beginnings.

“Family is everything,” Kulkarni said.

She believes perseverance, strength, and determination shape the way she views the world. Currently, Kulkarni lives with her mom, aunt, and a cousin she considers to be as close to her as a brother.

“There are benefits and issues to life in America,” she said.

There are more opportunities in America, she said, but she struggles to answer the question of “at what cost.”

She wonders if she is sacrificing her Indian culture the longer she stays in the United States and becomes more Americanized. However, despite her love for her Indian culture and the family values it brings to her life, she cannot imagine herself moving back to her country.

“I do not know if I could live up to my fullest potential in India,” Kulkarni said.

Kulkarni’s educational background has also shaped the person that she is. Kulkarni went to a diverse middle school, but currently  she attends a predominately white girls school, Academy of the Holy Cross. “ (I) realized the impact that I can have in communities that are not familiar with people of color,” she said.

“I feel like I do have a voice at my school,” she said. She uses her voice to educate students and teachers about India, which many of them have only seen negative representations of. Kulkarni says that she is saddened by the content of her history classes and wishes that India played a more prominent part of her high school history curriculum.

Kulkarni also hopes to leave a mark at The Academy of the Holy Cross by being involved in many school activities including Debate/ Mock Trial, Newspaper/Broadcast, Social Justice Committee, Anti-Racism and Social Justice Board, AAPJ Club, Foriegn Policy Youth Collaborative,Young Progressives, and Student Ambassadors.

One of her biggest accomplishments to date, she said, was becoming a published poet at 14.  “This was the most exciting thing that happened to me,” Kulkarni said.” This was the culmination of one and a half years of work. It solidified my love of writing”

While Kulkarni had many happy days and impressive accomplishments, she would also face challenges and difficulties. Kulkarni experienced a devastating blow to her nuclear family at the age of 13 when her parents divorced. This had lasting effects on her life and mental health, and she thinks this is the reason she consistently holds herself to high standards. She has invested time and energy into becoming the perfect college applicant. She is currently interested in colleges like Princeton, Brown, and University of North Carolina Chapel Hill.

Looking back on her time in middle school to the present, she regrets not prioritizing herself and instead invested all of her free time into clubs and activities at school. “Engulfing myself in activities was my personal coping mechanism,” Kulkarni said.  “I felt like I needed to be perfect to be loved.”

Witnessing her mom’s strength during a difficult time made Kulkarni stronger. Currently, they have a tradition of working out twice a week together. During that time they debrief and talk about serious topics that have occurred throughout the week. “My mom is my best friend and the rock in my family,” she said.

Kulkarni’s relationship with her aunt and cousin was always strong, but also grew exponentially amidst her mom’s separation. “My cousin was more like my brother, a positive male figure in my life,” she said. “He played basketball, so I began to play basketball and he played piano, so I played piano.”

Kulkarni became an active changemaker in her community by choosing to educate others about her culture.

“My dream is to become a political correspondent because this profession is super important now to make change,” she said.