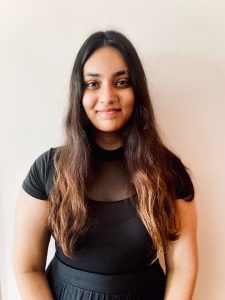 As a rising high school senior in Bangalore, India, Aditi Upadhyaya describes herself as “very opinionated which is not always a good thing.”

At the same time, she notes she is also an introvert, using writing to share her opinions. If given the choice, she would sit in the back and keep to herself in a normal classroom setting. “I am not a very social person at all,” she said.  “I’m not even very good at socializing with people I know.”

Although she now lives in Southern India, she was born in Lucknow, which is in Northern India. Upadhyaya’s parents are from different states of India, East and North. Each state has its own culture, and she has adopted different customs and traditions. But at times growing up, she was overwhelmed with which culture traits to call her own.

“For a very long time I struggled with what state or language to pick,” Upadhyaya said, adding she speaks six languages.

What she did take away from her parents, specifically her mother, was her focus on activism.

“I am for sure, 100 percent a feminist, and this stems from my mom’s side of the family as she lived really far east close by to Bangladesh where there are a lot of Muslims,” Upadhyaya said. “When the countries of India and Pakistan were partitioning, there was a lot of violence and protests regarding Indians’ freedom, and my mom’s family was very active in these Indian Freedom Movements. I think their ways of continuously advocating have definitely passed onto me.”

After high school, Upadhyaya plans to study political science and gender/women’s studies at a University abroad.

Writing and having such strong opinions aren’t common for most Indian high school students. Upadhyaya said schools operating under the Central Board of Secondary Education, or CBSE, (affiliated with New Dehli) are very censored and nationalistic and don’t allow for a great deal of independent thought.

“Under the CBSE board, you don’t have to put in a lot of effort,” she said. “It’s actually really easy, and so it doesn’t prepare you for anything you’re going to face.”

In Bangalore, she attends an IB (International Baccalaureate) high school which is more rigorous than her previous high school.  “It was a challenging experience [changing to IB], and it even gave me a slight cultural shock, yet I absolutely loved integrating into this new environment,” Upadhyaya said. At her IB school, she hopes as COVID vaccines are produced and life slowly repairs, she’ll be able to attend normal school and prom.

“I would say I’m a visual learner, and I prefer in-person learning so for me,” she said. “It’s been very, very hard. Sitting at a computer for about 8 hours, it can get very depressing.”

To alleviate any stressors, yoga has been instrumental in her daily routine, and Upadhyaya has a passion for it. She finds the best time to really find her zen is early in the morning. What about her sleep schedule? “I survive on lots of coffee,” she said enthusiastically.