Her sights set on Congress 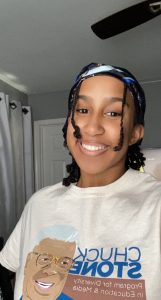 Leena Saif is on a mission to become a Congresswoman as she sees the U.S. becoming more divided, and her activities in high school are a first step toward that goal.

“I’m very passionate about changing America,” said Saif, 17, a student at Mallard Creek High School in Charlotte.  “Recent events such as the murder of Ahmaud Arbery, George Floyd’s murder and Capitol riots have shown me the division in the country, and there must be change. There is too much polarization, and I want to unite the American people.”

Saif’s newfound passion for social justice became clear with last year’s increased police brutality and racial inequality and her own work. Saif participates in multiple extracurricular activities, such as vice president of the honor society, Teen Democrats and Girls who Code. She is also the founder and president of Girls Up, an organization to that empowers young woman and teaches feminist morals.

Born in Saudi Arabia, Saif immigrated to the U.S. in 2006 along with her mom, dad and brother in hopes for a better life.

“I remember little about my life in Saudi Arabia,” she said. “I was so young when I moved that everything is like a faint memory.” Despite not remembering specifics about her life in Saudi Arabia, Saif never forgets her identity and culture. She understands that certain hair styles, fashion trends and even the way she talks could be weaponized and used to classify her as “ghetto” or put her in a certain stereotype. However, such possibilities do not stop her from being herself and expressing herself.

These traits have strengthened Saif’s ability to speak up for herself because she knows others might not have her back as a Black woman in America. With more and more people of color in office, Leena said her confidence has skyrocketed and she knows that she can make a major impact in this country.

Saif is one of 2,400 students in her highs school. She said the diverse environment has caused her to interact with numerous people of different backgrounds.

“Being around minorities has caused me to feel more included in my environment,” she said. “As an immigrant, I might not have been welcomed in other schools like how I was welcomed into my school. The diverse community was definitely heartwarming.”

As to what steps she was taking now to help serve her end goal of being in Congress, Saif said: “Being an editor has given me journalistic insight and has provided me with opportunities to improve my people skills, which will help with becoming a congresswoman. Being vice president of our National Honor Society chapter has allowed me to get in touch with my community and give back to the city that raised me. Lastly, being VP of our Teen Democrats chapter has allowed me to get more involved in politics and become a better-informed citizen, which I believe is super important especially since I’m going to be able to vote in the 2022 midterm elections.”